I could quite easily hold up the Peugeot 205 as one of the best cars of the 1980s. It replaced the dumpy, uninspiring 104 with something that remains super-stylish today. This is one of the most attractive hatchbacks of all time. Every line seems just about perfect. Quite remarkable for an in-house design, from a company that hardly had a track record in producing genuinely attractive cars. I mean no offence, but while the -04 range certainly had charm, they all lacked the game-changing wow-factor of the 205. 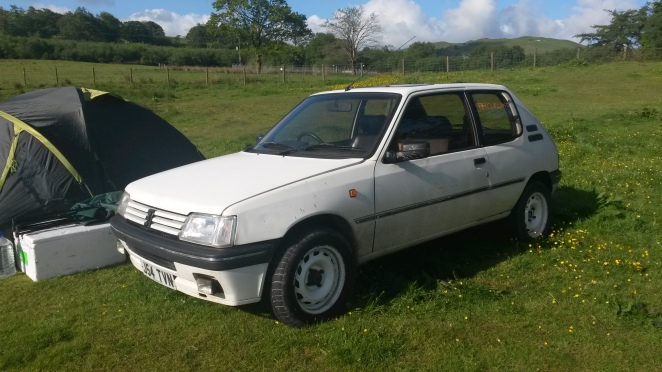 This 205 packs plenty of punch.

As well as that, it manages to be comfortable, it handles really rather well and even the tiny 954cc poverty models are good fun to drive. The huge hatchback and folding rear seat means they’re surprisingly practical too. There’s a strong, and very lengthy, engine line up. One of the best diesel engines ever made. Hilarious power in the 1.9 GTi. Pretty amusing power in the smaller XS and 1.6 GTi. There’s a pretty convertible. In France, you could even buy a stylish van version – not just the hatchback with plated over windows that we got here.

Quite rightly, it was a huge success. It made cars like the Austin Metro seem awfully old hat (much as I love them) in a stroke, just a few years after that car was launched. The STDT was one of the first DIESEL hot hatchbacks. Here was a car that could be entertainingly brisk, but would also deliver 45mpg or better. Oil burners really had come a long way.

The car tested here has had the larger 1905cc turbo diesel inserted from a 306 (I think). Furthermore, it has undergone quite a few mods (better intercooler positioning, cranked up fuelling) to ensure it really is very brisk indeed. This was the first 205 I’d driven in quite a long time – possibly since I owned a 1.0 XE back in about 2000. So, what was it like?

Firstly, all the usual 205 hallmarks are there. Enormous side doors (this being a 3-door) and a gearlever that was seemingly stolen from a coach. It’s massively long! But this car is all about the power delivery – and how! Progress is sluggish until you sneak beyond 2000rpm, at which point it’ll light up the tyres! This is not a smooth, torque-laden turbo diesel, it feels far more like the abrupt power delivery of a BMW 2002 or early Audi Quattro. It’s a case of lag, lag, lag, OH MY GOSH THAT’S QUICK! Before you hit 4000rpm, change gear and do it all over again.

I’ll be honest, this is not actually my idea of fun. I like the turbo diesel in my XM, which gently increases power from 1500rpm as the turbo whistles into life. It’s smooth, almost seamless and a world a way from this nothing-nothing-BANG approach.

It’s hugely entertaining for sure, especially with the smokescreen it seems to generate, but there is no chance I’d want to live with a car like this every day. I’d find it too frustrating. It’s exactly why I tired of my Peugeot 306 DTurbo and my Citroen BX turbo diesels. You find yourself constantly facing a battle to keep the engine in its incredibly short sweet spot.

One thing is for certain though. This car certainly proves that a little light tweaking can make a fun, economical little car an absolute riot. All while topping 40mpg on waste vegetable oil. Not my cup of tea then, but I can certainly see the appeal.