This is a car that attended Shitefest last year, after a monumental weld-fest. Unsurprisingly, it was rotten as a pair, and most of the underside had to be replaced. I didn’t get to drive it last year, so, despite the owner now temporarily living in Australia, I thought I’d better not miss out this time.

While the owner is away, he has loaned the car to various members of the Autoshite forum. It was one of these temporary carers who brought it to Shitefest. 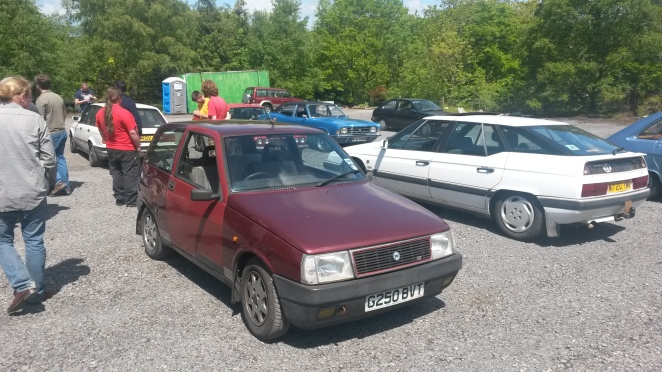 First, a bit about the Y10. In Italy, it was actually badged as an Autobianchi – the spin-off from Fiat that has a history of producing slightly-quirky designs, such as the Primula – the first modern-era hatchback with a transverse engine and end-on gearbox. MacPherson strut front suspension is allied to a dead ‘Omega’ beam axle at the rear. This formed the basis of the suspension improvements on the Mk2 Fiat Panda, when the simple leaf springs were replaced by coils.

This one is a GTie – which replaced the frenetic Turbo in 1989. It uses a 1.3-litre engine, not one generally used on Fiats at the time, but an overhead-cam version of the Fiat 124 engine, built in Brazil. It seems the Y10 uniquely used a fuel injected version of this engine. Power output is 78bhp.

I’d heard people say these cars were a good laugh, so I climbed aboard with many great expectations. The first thing that struck me is how wide this car felt for a small thing! It’s a bit Tardis-like. The engine isn’t overly quiet, but as I accelerated up my favourite test hill, I actually hooted out loud! Gosh, this car is hilarious! A kerb weight of 850kg means there’s not much weight to shift, but it really does feel a lot more powerful than the paper stats suggest.

The pedals are tiny though, so its best to avoid braking. That’s fine, as this car handles absolutely superbly. It makes Minis seem a bit reluctant with the way it dives into corners at seemingly suicidal speeds. I just had not expected a supermini to be such an absolute riot. I imagine it’s not bad on a long trip if you can resist endlessly wringing its neck.

You can keep your XR2s and MG Metros though. When it comes to diminutive fun, this is my new benchmark. It’s entirely worthy of the Lancia badge.