Time was running out. My 2CV was creeping towards its 200,000th mile, but there was a serious danger that the MOT was going to run out before it got there. There was an amazing feeling of deja vu here, as I’d had much the same dilemma way back in 2002, when Elly the 2CV was nearing her 100,000th mile with an MOT deadline. I solved that problem with a 350-mile day trip to Snowdonia. Now, I lived in Wales. Where was I going to go?

That problem was solved by an invite to visit family in Sussex. There’s nowt like seeing our nephew and neice (and associated family and animals) to motivate us to get on the road. Even in the days leading up to the trip, I found myself looking longingly at the XM. Comfortable seats. Absolutely serenity at motorway speeds. It was clearly  the sensible choice.

Pah. Where’s the fun in that? My wife pointed out that it was no wonder Elly the 2CV was struggling to reach 200,000 when I kept finding excuses not to drive her. It’s true. Her annual mileage has plunged below 3000 at times in recent years. It has been over 10,000 at times. So, I committed to the plan, checked the levels and off we went!

The trip didn’t get off to the best of starts. Within just a few miles, I’d rounded a corner and, distracted by an approaching van, drove into a HUGE puddle. This sent up a wall of water, which we then drove into. Elly began spluttering and banging, popped out her air cleaner and steamed up like a sauna. The van driver must have found it hilarious. Elly cleared her throat and picked up and off we went, though I stopped once we’ve dropped down from fearsomely chilly parts to refit the air cleaner. 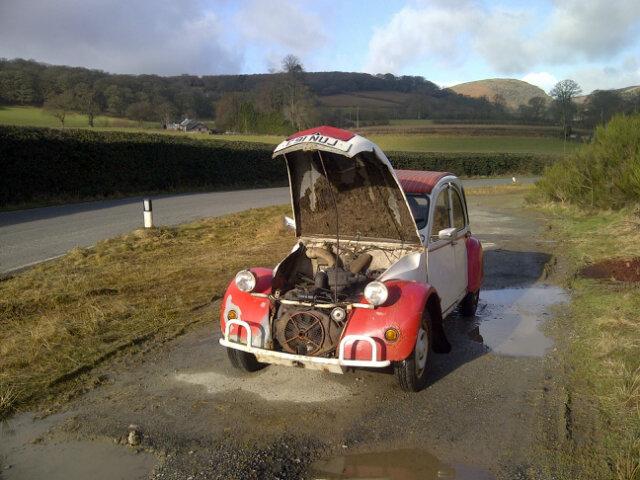 Oh dear! Not an ideal start. Too much water sees Elly struggle.

We drove on, but had to stop again at Builth Wells due to a misbehaving front indicator. I wiggle the bulb. It worked again. We drove on. We got as far as the Brecon Beacons before it played up again. We stopped for tea and further investigation. 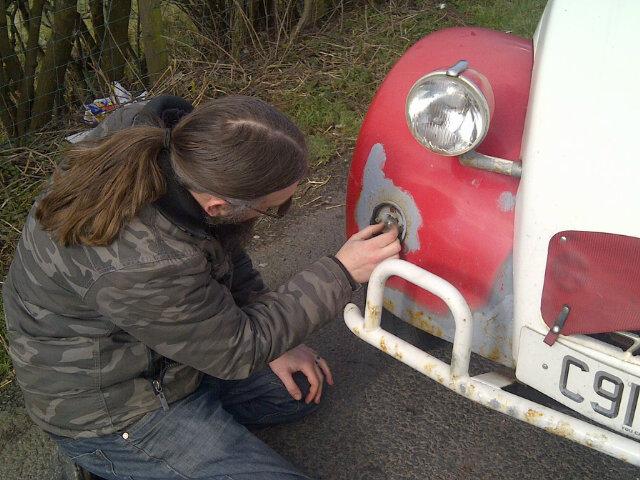 A duff contact was causing the indicator to not flash.

This was a successful fix. We headed for Newport and were soon tearing along the M4, heading east. The only real problem was sunlight – it was blazing in through the side window. I was forced to block it out with the sun visor. This was hardly the end of the world. We did have the misfortune to visit Membury Services on the M4. My recommendation is that you do not. The car park is disgraceful, and the way the traffic flows have been designed is absolutely hopeless. Forcing trucks to merge from the right – that could only be designed by someone who has never driven a truck. Or had even a modicum of common sense. We filled up, with annoyingly expensive fuel, and drove on. At least it doesn’t take much fuel to fill a 2CV. We’d used £21 of fuel so far.

We made it to the M25 very swiftly indeed, and stopped at the new, rather delightful Cobham Services for another break. This was much more like it, and the weather was simply fabulous. 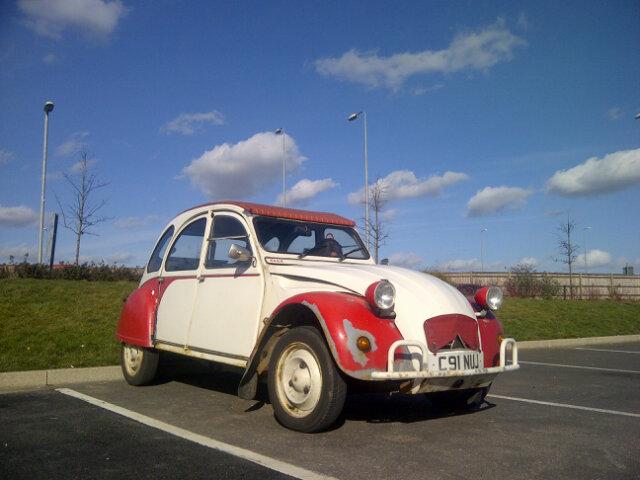 Basking in the sun at Cobham services

As you can see, the grille muff remained in place. Official advice is to put it on below 10 degrees, which it was, and remove it at 15. It’s fine to keep it in place at motorway speeds UNLESS you own a very late 2CV, on which extra sound-proofing runs the risk of you cooking the engine.

The M25 wasn’t too bad for traffic, but the road surface was something else. The concrete sections set off a noise inside the car that made it sound like every mechanical part was starting to seize. It wasn’t very pleasant at all. The odd short section of tarmac reassured us that our steed was not about to give up. 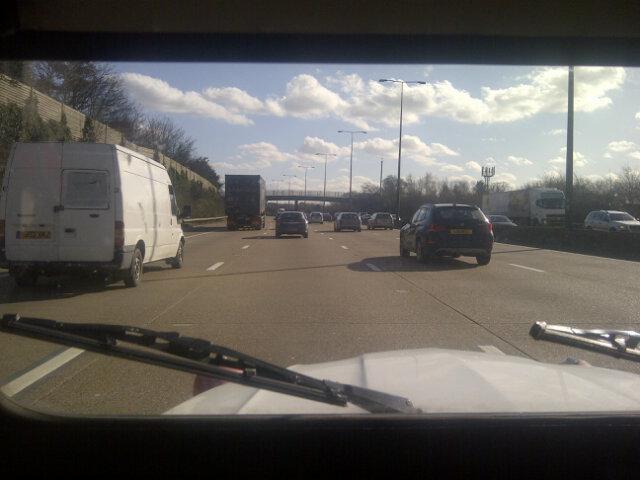 2CV on the M25, and the most horrible road surface in the world

However, we made it to Sussex and there was much merriment, tea and some plant swapping. We know how to live.

The next day, we didn’t even leave the house. Our nephew and niece kept us quite busy without us having to go anywhere. The day after that, we went off to explore Lewes. While Elly was parked up, she managed to attract a rather fine friend. 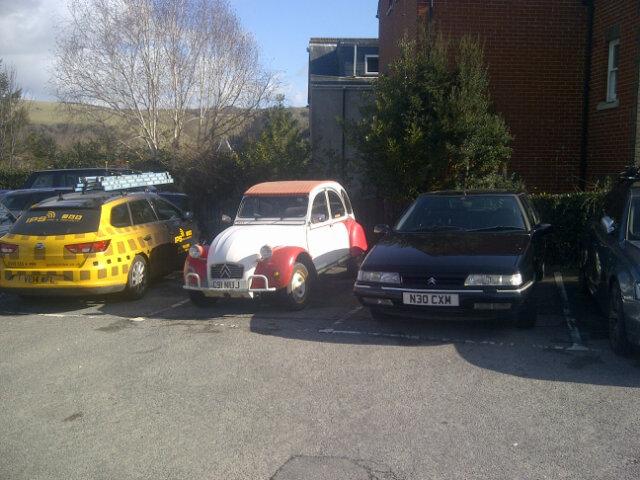 I guessed that the XM must be owned by an enthusiast – look at the number plate and general condition. I wasn’t wrong. ‘FakeConcern’ had posted his own version of this photo on the internet and contact has now been established. It seems Elly is famous enough for plenty of people to recognise her.

I didn’t meet ‘FakeConcern’ though. I took this photo before we headed off for a second tour of Lewes, and it was still there when we returned.

All too soon, it was time to head home. We left Sussex at half eight this morning, knowing that should we make it home successfully, Elly would hit 200,000 miles at some point. With that in mind, we decided to stay off the motorway. The weather forecast was another reason to stick with A roads – a headwind was very likely. When your car has only 29bhp and the aerodynamics of a crumpled paper bag, it pays to pay attention to this sort of thing!

The A272 is a largely delightful road that snakes across the south. It’s certainly a lot more enjoyable than the M25/M4, with pretty places like Petworth proving an utter joy to pass through. There was a section of A303, then some other road I’ve forgotten and eventually, the A417 bypassing Swindon. We had a brief stop for lunch just after Swindon, before heading to Gloucester – which is where Elly hit the second major milestone of her life. 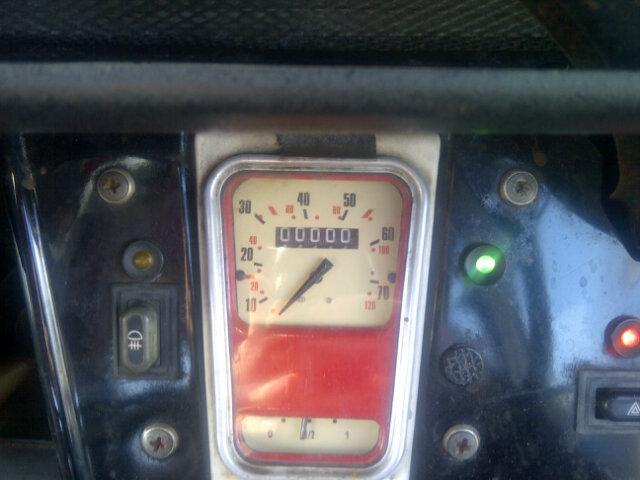 She didn’t choose the best of locations, so I had to hurriedly use a bus stop to grab the above photo before we quickly got moving again. After that, it was foot to the floor as we raced into Wales. The headwind was making 60mph quite hard work, so perhaps raced isn’t quite the right word…

It was starting to feel like a true marathon now. I was starting to feel tired and Elly was starting to groan in a manner that suggested that she’d had enough too (must grease those knife edges…). Hailstorms livened things up, and leant a sense of urgency – worse weather was a possibility. All was well coming over the Elan Valley a second time though. We were almost home. 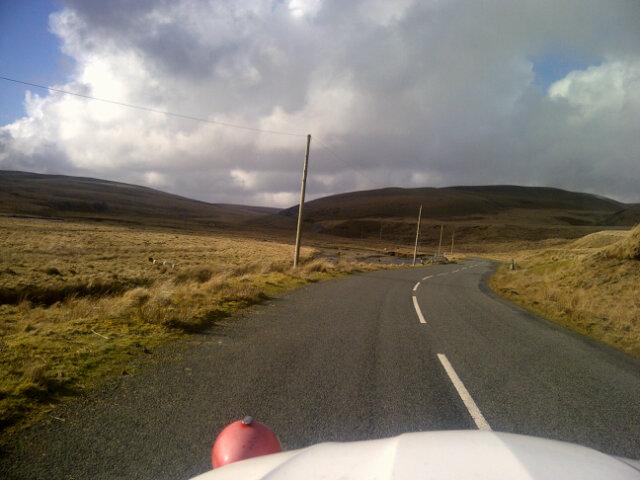 As we plunged over crests and weaved our way through the mountains, I recalled how I’d done much the same thing 13 years earlier, as I marked this car’s 100,000th mile. You really can’t beat the rural roads of Wales for driving joy. It’s a country I like very much, for this and other reasons. I’m not sure Elly will make it to 300,000 miles though. Her body is a right mess. But I’m not going to dwell on the future at the moment. Instead, I shall celebrate my incredible relationship with an incredible little car.