About ten minutes ago, I realised that it’s a very important anniversary. Yes, my wife and I have yet again forgotten our wedding anniversary. It was two days ago. We usually have to rely on friends to remind us.

Today really is an anniversary though. 18 years ago to this very day, I jumped off the number 18 West Midlands Travel bus in Cotteridge, Birmingham and after a short walk, picked up the keys to only my second car ever. A 1984 Citroen 2CV6 Special in bright red, called Sweet Pea. I paid £650 if I remember rightly, with my decision swayed by the replacement chassis it had, and the Reef sticker on the window. I was a fan of the band at the time.

It was with that car that I discovered the Deux Chevaux Club of Great Britain. I joined in October 1996 and the above picture is from the first event I went on Raid Tan Hill. This is a drive in the North Yorkshire Moors that still takes place every year. It was by far the furthest I’d ever driven from home. We even stayed in a hotel. That was possibly the first time I’d ever done so. Oh to be young, free and with 2CV!

Sadly, I was no better at dealing with rust than I am now. 2CVs were cheap, so I eyed up a really small welding bill and spend £750 buying a 2CV with a better body from a specialist, who then replaced its rotten chassis with the one from under my red special. Now I owned my first Portuguese-built 2CV! I’d also started a ridiculous cycle of only owning cars for six months, or less. It still persists pretty much!

Me, my friend Louise and Misty the 2CV

Sweet Pea’s engine sat in our shed, but not for long. I soon tired of poor Misty and sold her. For about what she cost me to buy I seem to recall. A rare occurrence! I replaced Misty with a £375 Dyane called Mildred Mildew the Marshmallow. I’ve lost some of my creativity I feel since then when it comes to car names. Mildred’s engine burnt almost as much oil as it leaked, so Sweet Pea’s heart was installed. I did that job with a club friend. What an experience! Drive to friend’s house, rip car apart, drive home with a different engine powering it and no two-stroke hue from the exhaust.

Sadly, I don’t seem to have an electronic photo to hand of Mildred, nor Jemima Puddleduck, Abby-Jo, the Skoda 105Lux, Collette (a free 2CV!), a Peugeot 205 or my first BX, purchased in 1999. Yes, I owned all of those vehicles in just three years! I bought a brand new Daewoo Matiz in 1999 as well. Clearly I was very young and very foolish (though I did like Purple Myrtle!)

Me on the right, with my Acadiane. Dyane posers are still friends. Taken in 1999 I think

My first van and also my first left-hand drive vehicle! A 1984 Citroen Acadiane called Wilma the Whirlpool for fairly obvious reasons. Gosh that van was fun. If you think a 2CV leans a lot on bends, you haven’t seen anything until you’ve witnessed a fully-laden Acadiane Mixte (with rear seat full of friends and camping gear) cock a rear wheel on a roundabout! It was very rotten sadly and a failed restoration attempt saw it carted off for spares.

These were truly joyous times. I’d jump into whichever aircooled machine I owned and would drive all over the place. Mildred the Dyane covered 14,000 miles in her year with me. The poor thing only got serviced once! I wouldn’t have known what a kingpin was, let alone where to grease it. I had friends at university and I’d nip down to London to visit for the night, or help them move to Hull. We once drove all the way to Blackpool and back, from Birmingham, to try and catch a Radio 1 live show that had finished by the time we got there! Via Liverpool…

Petrol was about 60p a litre and friends would scrape the pound coins together so we could go off on our great adventures. In the summer, the roof would be rolled back and good times were had by the bucket load. Almost every weekend would involved driving some crazy distance to attend a 2CV camp somewhere. I recall discovering understeer and oversteer on a wet, Lincolnshire road, five-up and somehow surviving. That was in Mildred. We also took her greenlaning in Yorkshire, surprising a group of trial bikers. How was a car that cost less than £400 so much fun? You can see why I’m often loathe to spend more.

In fact, I HAVE found a picture of Mildred! Here on the right, with her friend George. 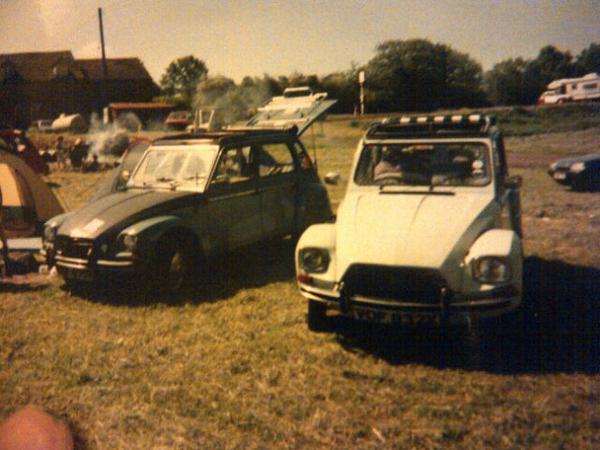 My mate’s car George, and my Mildred Mildew the Marshmallow

Life got more serious though. That setting-down stuff seemed to occur, and not just with partners and sensible jobs (yes, I’ve had plenty of those too). In 2000, a red and white 2CV stole my heart. My first Dolly. She’s still mine now. She must be Spécial.