A week today, I was sitting in The Midlands, frantically browsing the internet to find a car to buy and drive home in. The things we do to avoid three hours on a train.

Eight days and 250 miles later, I’m very pleased with the way my emergency purchase has panned out! In the past two days, I’ve been tackling issues. The wheels have been balanced to cure an annoying wobble and the loose catalyst heat shield has been silenced with an exhaust clamp. I’ve also had a new oxygen sensor fitted, which means the Check Engine light has finally gone away. A frustrating rattle from the back end turned out to be the bars that hold the boot open. A bit of insulation tape padding cured this. Obviously, there was a fair ol’ burst of sticker removal too. 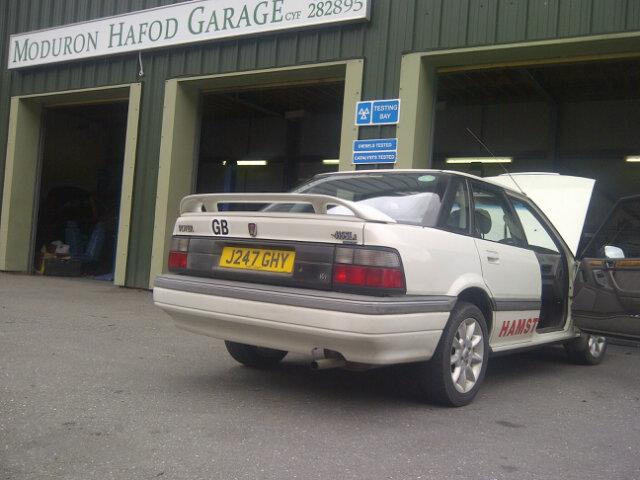 But the more I drive this car, the more I like it. A lot of people seem to write the car off as nothing but a Honda wearing Rover badges. That’s seriously unfair. Honda were not at all keen on the MacPherson strut front suspension for a start, preferring double wishbones (as used on the Japanese-market Concerto). Rover won out though, using its experience at providing good European-friendly suspension. It’s a good history too, when you consider the different techniques used – baffling bulkhead-mounted springs on the Rover P6, Hydrolastic, Hydragas, rubber cone, torsion bars. With the Rover SD1, Spen King even proved that a simple live rear axle with coil springs could be good!

I digress. Rover also had the main say on the interior, and that’s one reason it’s such a happy place to sit. It’s one of those cars that just feels ‘right’ as soon as you clamber aboard. There’s a hint of Honda-esque low scuttle, but it’s not too low. Visibility is superb and the steering wheel, which has a surprising amount of rake to it, feels wonderful in the hand.

This is a lovely place to sit

What really impresses is that it’s nice to drive quickly, but also relaxing due to the lack of engine revs. I was pretty sure it’d be a rev-happy monster, and it just isn’t. I also thought it might be a bit genteel – perhaps because the flat cap brigade like them so much. It isn’t though. It has a lovely poise about it when cornering, and the steering is surprisingly pleasant. A touch light perhaps, but not alarmingly so.

The power steering pump does make alarming noises though – I fear for its future! Other than that though, the car seems really good. I’m hoping to get the sill patched up tomorrow and then it’s just a case of driving it and seeing how much I like it in a few week’s time!

Well, almost. I do have one big problem with the car and I don’t know what to do about it. Dating from 1992, this car is a late pre-facelift model. But it now wears a later grille and later two-tone bumpers. At this age, it should have grey bumper and grey lower body colour. The rear lights are also incorrect later items and of course that silly 200GTi rear spoiler is definitely not right! The alloy wheels are from a later Rover too. It’s very wrong. EDIT – actually, this car is from a rare period when they did have body-coloured lower edges and small indicators, but no fancy grille.

Many details are incorrect. Do I care?

But, I’m not sure I’m really bothered. My 2CV is nowhere near stock condition after all. It also has the ‘wrong’ bumpers and many detail inaccuracies. I wanted to put my own stamp on it and I did. Why would I try and make it look like original factory spec? Is it not better for a car to show how it has evolved over the years?

So, I’m not sure I care about the wrongness of my Rover. It’s a nice looking car as it is, so let it be, let it be.