I’d hoped to have started work on one of my videos by now, but I had a sticky problem. As you’ll recall from yesterday’s Blog, the Rover came covered in stickers. Most were removed yesterday, but some nasty residue was left.

Being keen as ever to avoid spending money, I raided various cupboards for various potions. WD40 can sometimes be good, but not this time. White Spirit was similarly hopeless. Brake and Clutch cleaner was very, very good, for a few seconds. Then you were left with an even bigger sticky mess than you started with. I even resorted to petrol, which did remove the residue, but turned it into very sticky, petrol-stinking globules. Even then, I was still having to use a credit card (not an actual credit card obviously as I hate them) to scrape the sticky gunk off. Ugh. Horrible!

Eventually, I dug out my bottle of Turtle Wax Bug and Tar Remover. It doesn’t spray particularly well, but it doesn’t evaporate either. I gave areas a good soak, then rubbed very lightly with a cloth and left for another minute or two. Then it was out with the non-credit card again for yet more scraping. Bloomin’ hard work, but the gunk I was scraping off was at least not sticky with this treatment.

The end result is a car that now looks really good from only a few feet away rather than at least 30 feet. 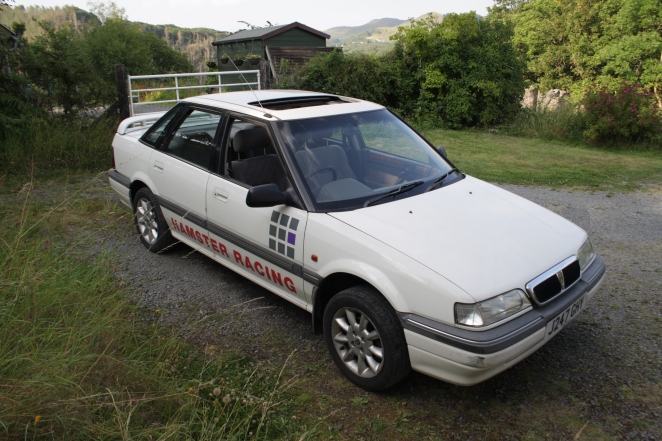 A couple of day’s of graft have paid off well

Yes, I’ve left the blocky door graphics and Hamster Racing stickers for now. I quite like them. It has been very fulfilling to see the car emerge from its stickered state. I’m up to about 160 miles in it now and I’m really enjoying it. With the 108bhp Honda D16 engine under the bonnet – a single-cam but 16-valve unit – it has more than enough power. Not that it’s a rev-heavy monster – it really isn’t. I love the generous spread of torque it possesses. Most unusual for a multi-valve engine, but perhaps due to the unusually long-stroke – 90mm compared to a 75mm bore. That’s unusual at a time when ‘square’ engines (where bore and stroke are very similar) were the rage. For instance, the K-Series has a 79mm bore to 75mm stroke – great for power, but not so good for low down grunt.

Boring stats aside though, the engine suits the car very well. It doesn’t feel like a car to fling into corners with abandon in the same way that it doesn’t feel like it wants you to utterly thrash it. That said, it is very composed when cornering, it’s just that the numb steering doesn’t really encourage you to go for it. It almost has that classic Mercedes-Benz feel of making you just want to relax. What’s the rush? You don’t get stressed by gearchanges either, as the shift is delightful and rarely needed. It’ll slog its way up hills with no downchange needed. Wonderful.

There is still that Check Engine light, but reading the blinking light on the ECU tells me it needs a new Lambda sensor. Shouldn’t be too expensive if I can get the old one out of the exhaust manifold… At least it’s nothing serious.