2CV: Too much hoon

I seem to have a real problem. I just can’t drive the 2CV slowly!

I covered a good 100 miles in the 2CV yesterday, attending the excellent Welshpool Air Show. I overtook a few cars on the way there, including a lovely Morris Minor Convertible. All overtakes remained legal, as the 2CV is scarcely powerful enough to break the National Speed Limit.

On the way home, I found myself ‘stuck’ behind the worst kind of driver. The one who is unpredictable, slowing harshly and far too much for bends, then accelerating up to the speed limit on the straights so there’s no chance for a feeble 2CV to overtake. I started to get wound up. Even though we were averaging 50mph, I wanted to go faster! Moderns blasted past, able to rely on sheer grunt to get ahead – not an option for a 2CV battling a headwind. Overtaking needs plenty of planning and a good run up!

After many miles, I finally managed to get by, only to find myself stuck behind a car that was even slower. This hardly seemed fair. I spotted a gap and went for it. As I drew alongside the car, I could see that the gap was not big enough. I’d failed to consider the impact of gravity as we drove up a slight incline – me on the wrong side of the road. I decided to commit, with the 2CV in third gear and the valvegear threatening to go flying through the front wings. The car coming the other way was thankfully not moving overly quickly, but did have to ease off. I waved an apology and was away.

Looking back, I’m struggling to justify my actions. I wasn’t in a rush and the views are epic, so I could have just sat back, relaxed and enjoyed them. There’s a problem though. I hate driving the 2CV slowly! I think I see it as a responsibility to prove that the 2CV is not really that slow. Several times though, I found myself cornering with a little too much speed as I aimed to tread the fine line between conserving as much momentum as safely possible (because speeding up again takes so long) and not driving like a twat. I rather feel I overstepped the mark several times. Apologies if I alarmed you… 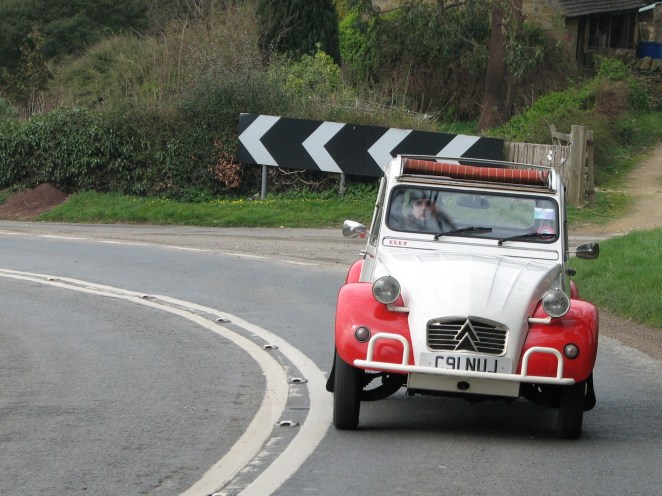 An artist’s impression of yesterday (taken years ago, not in Wales)

I think I desperately need a longer drive in the 2CV. When I undertake a long trip, I do ease off, because the stress of keeping the 2CV at maximum hoon is absolutely exhausting. Not that my cruise pace is that slow – I’ll still do my damnedest to attain the limit, but I’m in less of a hurry to overtake and more prepared to sit back at a cruise if traffic levels dictate it.

The real issue here is more simple though. The 2CV is too much fun to drive – something most so-called petrolheads have never really acknowledged, because Top Gear told them 2CVs were crap and anything with less than a zillion horsepower is embarrassingly feeble. Yesterday reminded me that on Welsh A and B roads, you’ll struggle to have more fun in anything other than a 2CV. More power might help with the overtakes, but you won’t be able to drive ‘foot-to-the-floor’ like I did.

So, I’m going to blame the 2CV for me driving in such a poor manner. It really wasn’t my fault.