It has absolutely poured down today, even by Welsh standards. Which left me wondering if I’d dreamt Saturday. It was a day of work, but enjoyable work – photographing old cars in beautiful scenery, within easy reach of home and all in glorious sunshine. If only more work days were like this! 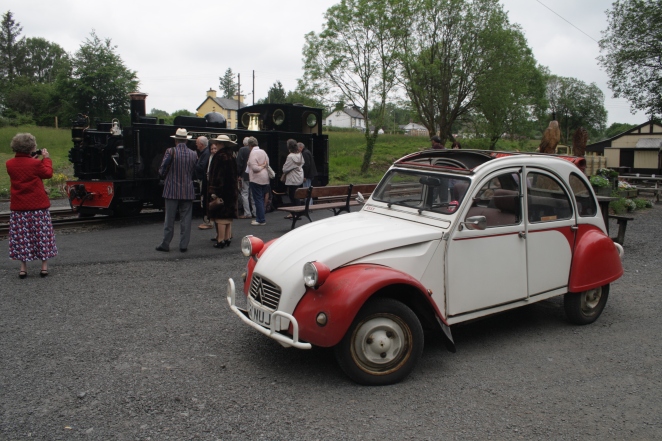 Elly the 2CV was the natural choice of work hack. The rear bumper makes a fine place to stand to get a bit more height for a nice photo and if that’s not enough, I can always clamber over the seats with the roofback. Which I did.

I then headed out to get some shots of the cars out on a road run. This required staying ahead of the pack and trying to head them off. You might think that 29bhp would be a hindrance here, but it really isn’t. The 2CV is not half as slow as you might expect. Certainly by the standards of a modern hatchback, the on-paper performance is lacking but compared to other elderly motor cars, a late 2CV is really quite sprightly.

That’s a bit unfair I guess. After all, the youngest car in the group was from 1949, a time when the 2CV had just 9bhp. Yes, nine. By comparison, the later M28-engined 2CVs are absolute flying machines. They are the Cosworth, the GTi, the pure power machines of the 2CV world. Perhaps. At this point, and to avoid a lynching, I should point out that Amis and Dyanes had up to 35bhp from their 602cc engines. They’re not 2CVs though. Not really.

There’s a tiny engine in there somewhere

It further highlights what an oddball the late 2CVs are. I own a car designed during the 1930s and early 1940s, but it was not built until 1986. It has hazard warning lights, a fog light and a fuel gauge. It’s a bit posh really. I often don’t feel that I own a ‘proper’ classic, forgetting that really, I do. Motor cars don’t get a lot more simple, and it even has some shiny bits – though not as many as it should have (I ‘deleted’ the chrome sill strips and hubcaps).

Anyway, the point is, I just don’t think I could cope with an early 2CV, or a classic car that couldn’t get a bit of a shift on when required. That might seem an odd thing to say when the vast majority of drivers would find a modern 2CV clambering up a hill hideously slow, but that’s about where my limit is. I try to use momentum as much as possible and avoid slowing down too much by cornering like a lunatic. This is fun and the 2CV’s handling allows you to comfortably do it. Backing up the traffic as you crawl perilously slowly up a hill I find less enjoyable.

Each to their own though. I was very pleased to see that people in cars more feeble than mine had travelled from far flung corners of the UK at the weekend. I look forward to telling you more about their visit once my official report has been published.