It may not look it, but the Volvo 850 was a hugely important car for the Swedish firm. It changed the company’s fortunes entirely, yet still looks unmistakably like a Volvo should. It was a car that demonstrated that Volvo could do performance. 850 estates went racing in the British Touring Car Championship, while the later saloons actually won races and vied for the title. The 850 was actually launched in 1991, which scares me a bit as I see it as a modern car. UK sales began in 1993, with a range of engines available, all five-cylinder. That’s a good start.

The T5 and T5R were the headline makers. They had silly amounts of power and very short tyre life. I ended up driving the 2.5TDI automatic, which is probably my favourite version as power is unnecessary in my book – perhaps even undesirable. While petrol versions used a new, Volvo-designed engine, the diesels used a Volkswagen five-cylinder engine. One I’m very familiar with as it was also used in the Volkswagen LT van. In the Volvo, it develops 140bhp.

This example uses the ZF automatic gearbox. I think the diesel/automatic combo is a really good one, when both engine and gearbox are strong. I once drove a Citroen C5 diesel auto to Paris and back. It was supremely relaxing, even around the French capital. This was starting to feel less of a Volvo 850 road test and more of a polite introduction at the start of a new relationship. Would I be inviting it home for coffee?

Clambering aboard started well. Comfortable seating is matched by a delicious amount of blue. As you’ll recall from my Land Rover Discovery and very blue Nissan Bluebird, I’m not averse to a bit of colour inside a car. Indeed I very much welcome it. 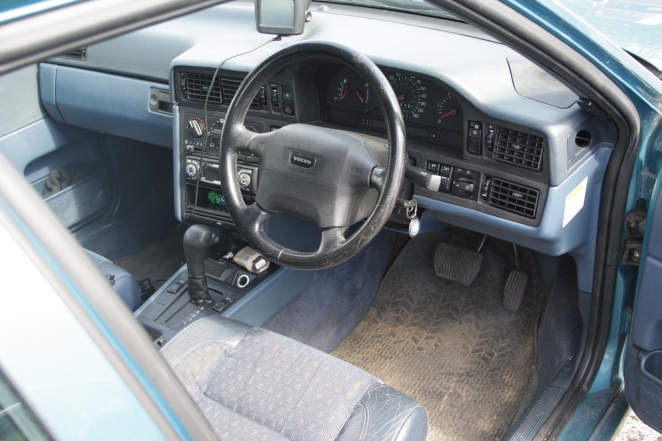 The engine fires up with a distinctive, off-beat clatter. One that’s very familiar from the minibus I drive. Pulling away is simply a case of slotting into D, releasing the handbrake and letting the torque ease you away. The engine growls in a quite delightful manner but the gearbox is a perfect match for it. It’s happy to use the bountiful low-down pulling power and doesn’t seem over-keen to kick-down. Perfect. Give it a boot full, and it certainly will drop a ratio, allowing the engine to warble as the revs rise. Turbo lag seemed remarkably non-existent and while performance certainly isn’t spectacular, it’s strong enough. The owner reported that it was simply effortless to drive down from Fife in it, and he was getting 48mpg. Remarkable.

The ride isn’t super smooth, but that’s compensated for by a composed feeling when cornering. The spirit of the car doesn’t really encourage all-out hooning, but the steering has a nice weight to it and is nicely direct. Bodyroll doesn’t seem to happen much either. It’s a very nice car to drive briskly even if it isn’t one for thrashing.

This is a late saloon – production ended in 1997

I was impressed. This felt like a car sitting poised and ready to eat up some miles. Even better, early ones now qualify for classic insurance! I’m finding it very hard to resist checking out the classifieds. Ok, I HAVE found it very hard to resist checking out the classifieds. Problem is, I’d have to sell my BX to afford a Volvo. Not sure that’s a leap I’m ready to make, but I did enjoy the Volvo very much. It’s a car that changed the public perception of Volvo, and very much for the better. The 440 and 480 hadn’t really had the market impact Volvo needed from its move to front-wheel drive. The 850 was the car that made the grade. Deservedly so. I thought it was rather marvellous. I’d better stock up on coffee.