It’s easily done. Many of us have been there. You’re a bit sick of the wallpaper in this room. There’s a bit that isn’t quite attached to the wall. Well, you need to redecorate anyway, so why not give it a tug? Now you’ve started, you might as well keep going. Before you know it, the floor and all of your furniture (as you weren’t actually planning to start right this moment) are covered in bits of wallpaper. Then you notice the state of the plaster. Oh bother. It’s knackered.

I’ve just done the automotive equivalent of that. I’d sprayed some lovely, Alpine white paint over the 2CVs sill – something we didn’t have time for after the welding. A coat of zinc primer had to suffice for the MOT. I knew the rear wing had to come off again to do the job properly. I pulled it off today but rather than just apply the paint as I’d planned, I decided to hose all the dirt from the now-exposed inner rear wing. This was a stupid idea, because simple hose pressure began removing underseal. And paint. I grabbed a wire brush and a screwdriver to remove all of the loose stuff. This is what I was left with.

Yes, I am aware that this tyre needs replacing as well. But it’s the rot that’s the biggest problem. There are a couple of small holes. I’m contemplating what bodgery can be employed here, with a view to complete inner wing replacement at a later date. I haven’t really got time to do anything tonight, so my plans for taking the 2CV away for the weekend are on hold.

That meant I had to do something about the BX’s blowing exhaust as I can’t face another crashy journey in the Sirion. The previous owner of the BX was having such a nightmare trying to get the system to seal that he welded up one of the connection points. Sadly, this joint wasn’t entirely gas tight. 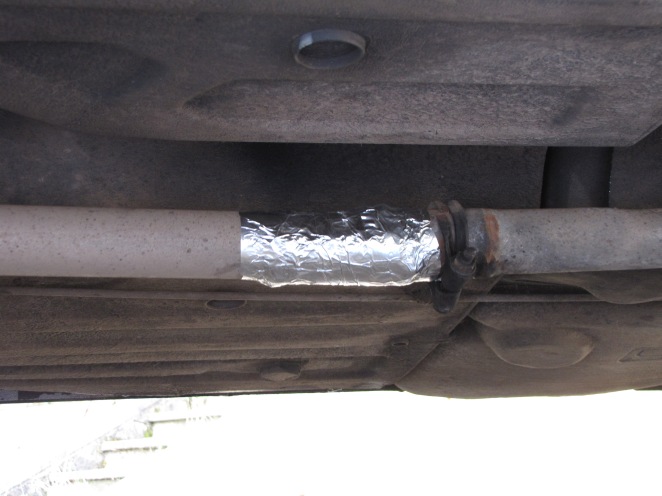 This was an official bodge, in that the paste I used was labelled as exhaust repair paste, and the aluminium tape was labelled as exhaust repair tape. What’s more, it worked too! We drove all the way to Kent and back with a perfectly leak-free exhaust. The problem was the pointless clamp. It has nothing to clamp anymore, so I removed the clamp today and found a new leak directly beneath it. More paste and some aluminium tape I had sitting in the garage for bodywork ‘repairs’ were called into use. It’s now leak free again until I can get a proper, welded repair in place.

While underneath, naturally I found quite a lot of surface rust. I really do need a rot-proof car!