The expedition to The North

Towards the end of 2013, Rachel announced that she wanted to see the Northern Lights. This seemed a rather splendid idea but the lack of funds made such a trip unlikely. Fortunately, Rachel works part-time and also holds a small contingency fund to which I am not allowed access. Apparently rusty old cars are not a contingency. Make no mistake, this trip was sheer luxury and our first proper holiday since moving to Wales in October 2010. Funding was still tight though, so the most economical car would have to be used for the trip. That meant the Sirion which, as it happened, I’d prepared for such an adventure by equipping it with a bargain set of winter tyres in early December.

On Friday 27 December, we loaded the poor Daihatsu with essentials, including a snow shovel and liquid snow chains. If you’re heading north in winter, you have to expect the possibility of some winter weather. The car was quite heavily laden, and this would eat into the fuel economy. It was averaging 45-47mpg on the way up. That drive up proved rather challenging thanks to the run of winter storms. Strong winds and heavy rain meant the motorway section especially was a struggle, especially on exposed sections. Here, the over-assisted steering proved a massive problem. It’s very direct, so trying to counter the effects of a gusty side-wind was very difficult. It was far too easy to over-correct, making maintaining a straight course near-impossible. Eventually, we decided we’d had enough and stopped at a hotel near Dunblane. My shoulders and upper arms were aching a lot.

The next day was calmer, and we drove another 200 odd miles without further incident. The Sirion really does bowl along very nicely on a long-distance trip, even if it does find hills hard work. As our route took us over the Cairngorms, the tiny 989cc engine was worked very hard to keep our momentum up. We reached the village of Helmsdale – created as part of the Highland Clearances and timed also to make the most of the Herring boom in the 19th century. From here, it was another ten miles down a single-track road to reach our very-remote cottage, where mobile reception and internet were conspicuous only by their complete absence. 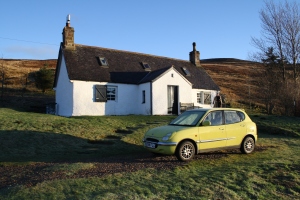 Being cut-off from technology was a real bonus. My life invariably involves being connected to the internet for work and pleasure. The enforced break was a very good thing and allowed me to properly unwind. We went for walks, went for drives and enjoyed the best that north Scotland has to offer. Thoughts soon turned to the main reason for our visit – the Northern Lights. This phenomena is occasionally visible from the UK, but you want to be as far north as possible. This is not, as you might expect, John O’Groats. That’s a good thing as it’s a bleak and fairly unimpressive place. Instead, we headed to Thurso, then east along the coast to Dunnet Head. This headland is the northernmost point of the UK mainland – the only way to get further north in the UK is to fly or catch a ferry to Shetland. Our drive north from our cottage was livened up by only having quarter of a tank of fuel. In Scotland, 2nd January is also a Bank Holiday. Would we be able find a petrol station that was open? Just finding a petrol station was tricky enough, and we didn’t pass one until we’d driven 30 light-footed miles. It was closed. I opted to keep following the main road in the opposite direction from Thurso to Dunnet Head. This was a bold move but a successful one. We found the only open petrol station in Thurso! Phew. We then retraced our steps and headed out of town to Dunnet Head.

Sirion basks in the sunset at Dunnet Head

What now followed was a very lengthy wait. We arrived well before 5pm and enjoyed a spectacular sunset. There was a hint of aurora activity at around half past seven, but it didn’t amount to much. We sat back and listened to a remarkably odd programme on BBC Radio 2 in which Harry Shearer (Spinal Tap and The Simpsons) played some very obscure stuff from his record collection. At 10pm, more than five hours after we arrived, Jo Whiley took over radio duty and made the mistake of playing some Paul McCartney. The radio was turned off. We continued to wait. At half past ten, we got treated to a gentle but definite show of Northern Lights. Actual aurora! The show didn’t last long, so we continued to wait. Another hour crept by and then things got better. I took this shot at 2345hrs. 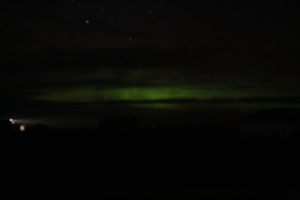 Not a very good photo as it happens, as I was cowering inside the Sirion due to gusts of wind. That and the cold rendered my tripod useless, so I was balancing my camera on the dashboard and trying to guess at the focus. It was still soft, as the gusts were still moving the car around! Still, it was mission accomplished. We had incredibly managed to see what we came to see.

We then had a rest day before driving home. I managed to do absolutely nothing at all on the Friday, which was good as Saturday would prove quite a challenge! We were treated to a telly in the cottage, so we’d been keeping up with the stormy developments around the UK, watching with dismay as Aberystwyth’s promenade was literally ripped apart by the storms. The forecast was grim, but Saturday – our travel-home day – was a rare window in otherwise grim news. The Sunday was meant to be particularly dreadful. That said, there were warnings of snow in central and southern Scotland, and north England too. Our route home.

We got up at the unholy hour of 7am and quickly packed and prepared. We managed to leave just after 8am – a record for us – and headed south as quickly as the little Daihatsu could carry us. The Cairngorms became a concern, but we needn’t have worried.

Very pretty, but thankfully the roads were clear

There were no problems and no more snow appeared to have fallen than had been around on our drive up the previous weekend. We stopped for a break north of Perth, then headed on south. We zoomed past Dunblane and on to Glasgow, where gritters were very much out in force and overhead signs warned of cold weather. We had another pause for lunch just north of the border, then pushed on – keen to get miles covered while it was still light, and while the weather was good.

We stopped at the truly excellent Tebay Services for another break – thoroughly recommended and a wonderful demonstration of how pleasant motorway services could be. We even bought some meat at the farm shop. I was still feeling fresh, even after 300 miles, so on we went, enjoying spectacular views as we headed south on the M6.

Astonishing views, from a motorway!

As darkness fell, the weather was still kind and our going was good. Almost ten hours after we started, we stopped at the Little Chef near Oswestry. For reasons I can’t really explain, I mourn the demise of Little Chef, so visiting this one felt like I was supporting an underdog – surely a very British pursuit. We were treated to the sight of a very tidy Ford Escort XR3i in the car park. Surely as sign from the gods that we were doing the right thing.

Nothing like taking an Escort to a hotel for the night

Duly reinforced, our journey home continued. All was not well however. After performing magnificently for more than 1500 miles, the Sirion began to display a worrying tendency to misfire during and after left-hand bends. This was very odd. It felt like fuel starvation and I began to suspect one of two things. Either the fuel filter was clogged, cutting fuel off when centrifugal force was added into the mix, or the leaky fuel filler pipe had been allowing water into the tank. I still don’t know which of these is the culprit and the weather will prevent me investigating today.

Then it started hailing. Finally, a test for the winter tyres! I cautiously pushed on and twelve hours and 560 miles after we set off, we were home!

I’m truly astonished by the little Daihatsu, which averaged well over 40mpg during the trip, despite being driven hard and being heavily laden. The economy did drop off a bit on the journey home, possibly because I was pushing it quite hard, but also possible due to whatever fuel fault there is. Regardless, it easily got us to the north of Scotland and back again, with the only downsides being that steering, rather harsh suspension and seats that lack enough comfort. Still, can’t be that bad if I can survive 12-hours at the wheel and still walk! The Sirion may not be the obvious choice of road trip machine, but it proved that size certainly is not everything. It fully reinforced my love of tiny cars.

2 thoughts on “The expedition to The North”