I haven’t yet clocked up 200 miles in the Golf – in fact, I’ve done more miles in the Discovery since Sunday morning than I have in the Golf in total. That’ll soon change, with a trip to Devon planned later this month. 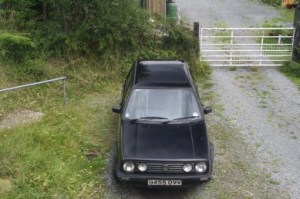 Eager and ready to go!

I did get to indulge in some town driving in said Golf this morning though, which really was thoroughly pleasant. The controls are light and even the unassisted steering is not the hardship you might expect, though I do have to remember to drive properly! You need both hands – something I do occasionally forget. The clutch is smooth and pick-up is instant. In these two regards, it’s a world away from my previous BX, and most BXs I’ve ever owned if I’m honest.

Visibility isn’t too bad – probably far better than most modern cars, though the pillars do have a certain heft to them. It’s a good size too, so slotting into parking spaces is not much of a challenge. Gleaming as it does, it’s a car I feel proud to drive around in. Not because of what it is necessarily, but just because it’s an older car that looks well cared for. This is an unusual experience for me!

I’ve had the subframe welded this week as a certain amount of crustiness was discovered. This is probably an interim measure and eventually I’ll replace it. £100 seems to be the going rate for a brand new one – you can’t really argue with that sort of price. It’s currently away to have the cambelt replaced while I’m on minibus duty tomorrow. Swapping a 1990 Volkswagen Golf for a 2010 Volkswagen Crafter is an unusual experience!

After a somewhat laggy turbo diesel, it’s nice that the Golf has a wonderful spread of torque. It’s happy at anything from about 1000rpm and there’s so much low down grunt that you rarely need to take it beyond 3000rpm. It’s very relaxing. I was cruising along earlier with the sunroof back (during a rare dry moment!) thinking that really, the Golf has almost everything you should need.

It isn’t all good news though. The ride isn’t too bad most of the time, but it crashes around horribly over broken terrain. Thankfully, there’s not much of that here, but it’s not pleasant when you find it. I’m afraid that the rear wiper is annoying me too. I think someone got a bit carried away with the stalk design. You push it away from you slightly to turn it on – to an intermittent setting – or a bit further and hold to operate the screenwash. To turn it off, you have to push it away again. If you want just a single wipe – which I often do – you have to quickly press the stalk twice. A bit unnecessary really.

Another grumble is that like most 1980s-onward cars, it’s impossible to get fresh air to the face when you’ve got the heater involved in demisting action. On a wet day, this is very frustrating as opening a window for fresh air results in sogginess. Here, I’m afraid to say that I began to miss the convenience of electric windows, which make it easier to open a window you’re not sitting next to for a bit of fresh air!

Overall, it’s all good though. The next thing awaiting the car is an ignition overhaul as the distributor cap is a bit of a mess. I’ll treat it to new plugs too, and possibly even new oil and filters.