Selling the Mercedes has proved about as easy as taking to the air in the proverbial lead balloon. It’s hopeless. No-one wants it.

Their loss I’ve decided. Now its running sweetly, it’s much nicer to drive and I’ll happily pay at the fuel pumps when the car costs so little to run otherwise. But what’s that scraping noise from the rear? Sounds suspiciously like a brake pad with no material left on it. You ignore braking issues at your peril, so I decided to investigate. I started with the driver’s side, because that was nearer my garage. With the wheel removed, I could see plenty of material left on the pads. Super! Then I started picking at the underneal around the subframe mounting. This was a mistake as there was very little metal behind it!

Not as bad as it could be – I’ve seen some where there’s no metal left at all – but it needs attention. The plasticky underseal that Mercedes-Benz used is really good stuff, but if it gets breached, moisture gets in and then gets held against the metal behind it. Thankfully, this corrosion seems very localised and plans are afoot to get it welded.

So, it was on to the other side, where I soon discovered a very similar bit of corrosion, plus a bit more into the boot area. Two small patches should have it healthy again. Oh, why was I doing this again? That’s it brakes. Ah, I think I see the problem… 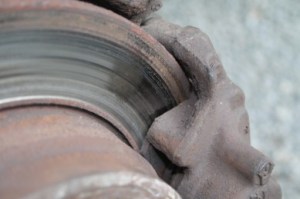 That’ll be the problem then. You can just about see that the backing plate of the pad is all that’s left and is now rubbing on the disc – hence the scraping sound. With such uneven wear from one side to the other, it suggests that this caliper has seized, and is not releasing the pads when the brake pedal is released. It can’t be a handbrake issue as that operates a set of drums housed inside the brake disc. Not very well as it happens, so that’ll get looked at as well.

So, as a bare minimum, it needs a set of pads and discs and a reconditioned caliper on one side – probably an expenditure of £150 or so. I should really change the aged looking flexi-hoses too, and it might well need a set of handbrake shoes. I haven’t even looked at the front brakes yet! I’ve also found many tired looking bushes in the back end, but if I’m not careful, this could turn into a very expensive mechanical overhaul.

I can’t drive the car while the brakes are so perilous, and annoyingly, I can’t order the parts I need due to a lack of funds. Frustrating, especially as the car is now running better than it ever has done!