It’s been a long time Monty…

The first car I drove after passing my driving test back in 1995 was an Austin Montego 1.6L estate in the rather pleasant shade of Lynx Bronze. It was my dad’s company car and a pleasant ol’ bus it was too. Leaping from a Vauxhall Corsa straight into this slab of Austin-Rover loveliness was akin to going from a dinghy to a royal yacht. This car was so big that you couldn’t easily reach the passenger door from the driver’s seat! It felt enormous.

All credit to my dad then because the weekend after I passed my test, he jumped into the passenger seat of said Montego and let me take him for a drive. Now, my dad is a lovely bloke, but he’s about as comfortable in the passenger seat of a car as I am. If Jenson Button was driving me, I’d question his abilities and would be convinced that I was surely to die in a spectacular fireball. I think my dad is similar of mind.

Happily, I didn’t crash but I still have happy memories of that first drive and find it a bit sad that the Montego in question was, like so many, scrapped many years ago.

Incredibly, I’d not driven a Montego since, though I did briefly own a Maestro 1.3L, which redefined the word ‘disappointing’ in my mind.

So when I found myself heading to the exotic location of Crewe to drive a Montego for the first time in 17 years, I was rather concerned about how the experience would pan out. Would it be utterly boring and disappointing like the Maestro or would it rekindle a whole heap of nostalgic memories?

I must admit that I’m one of few people who consider the Montego an attractive car. Especially in silver, with a surprisingly pleasant set of alloy wheels attached.

I know that Roy Axe, who moved to Austin-Rover just as the Montego was developed, was horrified when shown a Montego prototype. He disliked the scalloped sides inherited from the Maestro and the uncomfortable rear side glass. To his credit, he tweaked as best he could and the Montego was one of the sharpest lookers of its time – though the blobby Ford Sierra and ruthlessly angular Vauxhall Cavalier were hardly masters of style themselves.

It’s not a bad story inside either. The interior hasn’t dated very much at all really, with clear, informative dials only let down by the rather scattergun approach to switchgear. One gimmick I love is indicator stalks that are gently illuminated. The fit and finish isn’t bad, but sadly there are some nasty plasticky creaks and groans. Nothing unusual to a Citroen BX owner it must be said… 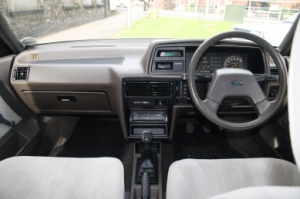 Not bad inside, almost pleasant!

But the time had come. Being a freelance writer allows you to indulge in moments like this. I was about to drive a Montego again.

You might mock, but I was genuinely excited about this. I’d hurtled northwards in my Nissan Bluebird with a genuine buzz, and not one generated by the Bluebird’s amazingly well constructed interior. I was putting the two cars head to head for a feature in Classic Car Mart – the details of which you can read in the November 2012 issue.

But this was it. The S-Series, 1.6-litre engine was up and running. Off we go!

The first thing that struck me is how un-boat-like it felt. That last Montego had felt wallowy and enormous, but I’ve driven an awful lot of cars since then. The Montego now felt really rather pleasant. There was no power steering, but it simply didn’t feel necessary, even with the extra width of the non-standard wheels and tyres. Noise levels were good, the engine felt perky and it was very comfortable.

Sure, it was about as composed in the bends as an X Factor contestant talking about how they were doing it for their guinea pig or grandfather or something, but that’s ok. This car harks from a time when family cars rightly placed comfort ahead of excellent on-track handling. It was fine if you didn’t push it. If you want a sports car, buy a sports car!

I really did enjoy this one though. It might seem odd to get excited about what has become such a forgettable car to so many people, but it was a firm reminder to me that ALL cars are worthy of collector status, for these are the cars that we remember from our younger days, and they’re often really rather good. 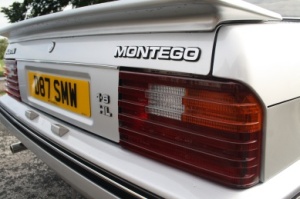 2 thoughts on “It’s been a long time Monty…”