I’m a car enthusiast, but I have a major problem with car museums, and I’m not sure I’m right.

You see, the problem is, the motor car is a marvellous creation – a way to taste freedom as you hurtle along at impossible (to a human on foot) speeds, scenery flashing by, engine roaring and your senses bombarded. Even in a Perodua Nippa.

Sure, I can look at a car and appreciate it, but that appreciation doesn’t last long. I mean, yes, a Citroen SM is a fabulous looking machine, but even I would struggle to look at one for more than five minutes. Throw me the keys though, and you’ll find it hard to remove me from the driver’s seat even after several hours. Unless it needs more fuel. Or has broken down.

But an SM just sitting there? No. Wrong. It’s like a caged bird, or a bear chained to the ground. It’s magnificence with its wings clipped. Stupendous wonder kept in a box and stored on a shelf like a mere trinket. Here is a car with a race-inspired Maserati engine, that makes a noise that can elevate the hairs on my neck better than Johann Sebastian Bach or Saint-Saens. A machine that floats in an uncanny manner on spheres filled with nitrogen and a strange green fluid. A car with steering that can centre its steering even when stationary and which adjusts its assistance level depending on speed. On a car designed in 1970!

The best kind of Citroen SM. One that is freeeee!

Seeing one just sitting around like a bored elephant is frankly a little disturbing. That’s exactly how I felt when I went to the Stondon Transport Museum a few years ago. There was little joy in seeing a car which, even though it is rare and spectacularly blue, hadn’t really turned a wheel for many years – possibly not since 1997 when it was put on display. The worst thing you can do to a hydraulic Citroen is not use it, which is why the car failed to sell when it first appeared at auction in 2012, and made less than £10,000 when it finally sold last year. I do hope it gets the recommissioning it deserves. If you own it, let me know!

I have problems with other museums too, even the hallowed Heritage Motor Centre. I remember visiting the place back in 1993, when it first opened. I remember how magical an experience it was to a then-15-year-old. But I also remember the Austin Sevens and BMW Dixi sitting around the escalators. They’re still there now.

To be fair to the Heritage Motor Centre though, they’ve got a lot better in recent years. More of the cars now seem to be running, and that is VERY exciting indeed. Not just because it gives opportunities for over-excited journos to drive them, but just because cars need to live and breath and feel some motion through their myriad components. Yes, I know it’s stupid to humanise a lump of metal, but to many of us, cars are more than just conveyances. They have soul.

And that’s what made the Practical Classics Restoration and Classic Car Show so good to me. It showcased cars that had lived a life and had the scars to prove it! Or that had been lovingly restored so they could enjoy another life. I could wander around the place looking at cars that yes, weren’t doing an awful lot, but which had great tales to tell. Some had made impressive journeys to get there – like Callum Beveridge and his near-1000-mile round trip to the show in his immaculately restored Citroen Dyane.

Definitely not a museum piece

Now, before all the museums in the land start castigating me, I should point out that I understand their problem. That being that it costs an awful lot of money to keep a huge fleet of elderly cars going. Vauxhall Heritage and Ford Heritage manage it, because they’re backed by enormous, global car companies. Places like Stondon, or even the Haynes Motor Museum, just don’t have the budget to keep every car going. I can understand that. I also know that museums often save cars from the crusher – I will concede its better to see a car not-moving in a museum than being turned into bean tins.

But I just prefer cars in motion. It pains me that the Coventry Transport Festival won’t happen this year, just because I enjoyed last year’s spectacle of quite so many classics in action completely beguiling. These cars weren’t being thrashed about, but nor were they just sitting around. They were simply being driven, and that was enough. Classic road runs seem to be on the rise at the moment and that’s fantastic news. Just like this gaggle of Austin Sevens I discovered at my local hotel the other day, the sight of old cars being used is truly one to warm the heart. 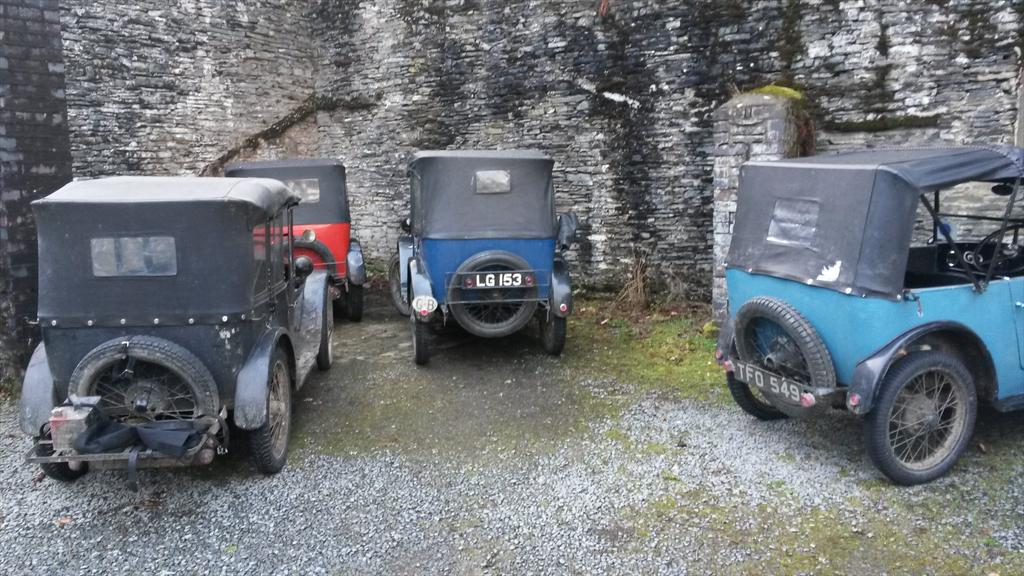 How utterly fantastic a sight is this? Austin Sevens in mid-Wales

So, while I understand the problems museums face – the same as many enthusiasts indeed – I must concede that I would still rather head out to find classics in action than to stare at shiny, motionless objects. To me, museums are often a bit too much like automotive taxidermy.