Apologies for the radio silence. Things have been rather busy of late. However, the new Rover has been collected. It didn’t make for a particularly exciting collection caper though. I handed over £230, drove it to London, stopped the night, actually had to put some fuel in it, then drove back home to Wales. The only problems were both indicator related – the offside side indicator fell out of the wing (it had obviously been glued in after failing before) in the final few miles, and the nearside front indicator bulb fell out of its housing (and then into the lamp where I couldn’t retrieve it) somewhere around Gloucester.

So, what of the car? First, some boring geekery. The Rover 600 is very much a Honda Accord. No surprise there, as most of Rovers cars at this time had shared development with Honda. Here’s the thing though, of all the Rondas, the 600 was the one that Rover had least say in, under the skin at least. Honda didn’t want to mess with a successful formula, so Rover were pretty much restricted to styling tweaks. What tweaks they were though! Here’s a Honda Accord of this period.

The 1995 Honda Accord yawnfest.

Bland is the key word. The rear end is even worse. A featureless rump that has absolutely no design interest whatsoever. Now, Rover had a challenge. It had to use the same basic structure as this, with the same windscreen, roofline and even the front doors. Yet somehow, designer Richard Woolley came up with this marvellous design. 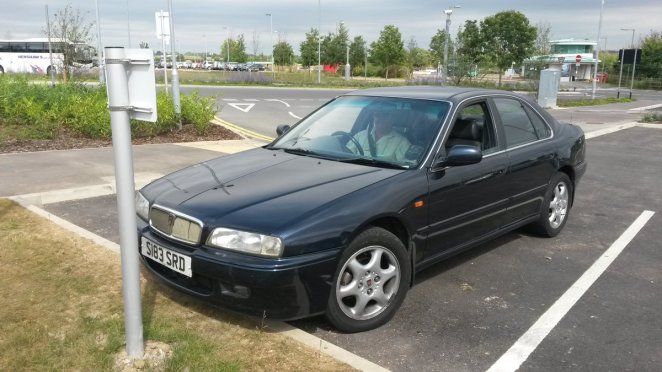 Frankly, I consider the 600 one of the best looking Rovers of all time. I rate it ahead of the 75, which always looked a bit bulky to me – and the front indicators were always odd, or even ugly. I may concede that a P4, 5 or 6 win it, but move into the 1980s and 1990s and there’s simply nothing to touch it. In my opinion.

Under the bonnet, there’s a further step away from Honda as Rover’s own L-Series turbo diesel is fitted. This is a rather fine evolution of the old Perkins Prima, as used in the Maestro and Montego, but now with electronic control of the throttle – albeit with a cable still involved. It’s a bloody marvellous engine, with practically no turbo lag at all. It pulls very smoothly indeed from just 1000rpm. Honda actually started to use this engine in its own cars. It is very good – I’d rate it as even better than the 2.1 turbo diesel in my old XM. It isn’t as powerful though, a shade over 100bhp in quite a large car. It never feels slow though, just not neck-snappingly brisk.

The steering is good too, though it was some hours and well over 150 miles into my ownership until I really got to exploit it on entertaining terrain – ie Welsh border country. It turns in very nicely and doesn’t have the worrying nose-heavy feeling of the XM. 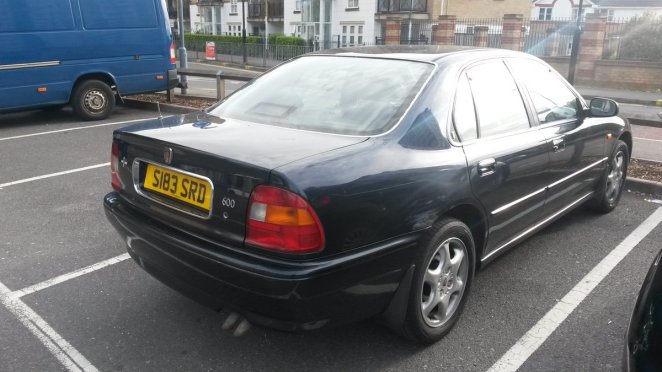 Looks nice from behind too.

It ambles along beautifully at motorway speeds too, which is good. Frankly, the only reason I have bought this car is because I need something good at motorway speeds. I’ve only used quarter of a tank of fuel so far (65 litres, 15 smaller than the XM), so I’ve no idea what the economy is like. Pretty bloody good is my best guess.

Downsides? Well, naturally, there are some. For a start, the suspension is rather on the firm side. Pity the poor Rover engineers who must have wanted something rather more supple. Instead, they got Honda’s short-travel, double-wishbone suspension. It makes the handling superb, but at the cost of ride comfort. It does crash a bit over broken terrain (ie London streets), and never really feels like it’s settling. It’s always jiggling about. Mind you, I’ve driven many modern cars that behave in exactly the same way, so maybe it was just ahead of its time…

I must concede that I’m not entirely won over by the colour either. These cars actually work well in lighter shades. I would have liked a sunroof too, and that was made even more desirable by the non-working fan blower motor and therefore non-working air conditioning. I’ll include something about that in my next report.

The gearchange isn’t the best either. I know bits on this one have been replaced, so it feels nice and tight, but it is also heavy in operation. It’s not great for quick changes.

But mostly, this story is all about the positives. The Ti-spec seats are a touch firm perhaps, but I got out after six hours at the wheel with no notable backache. There is a flick wipe feature. I can listen to Test Match Special on long wave radio. There is a foot rest (something I always longed for in the XM) for your left foot. I also got a ton of history with the car, including the owner’s handbook.

Frankly, it seems utterly ridiculous that such a good looking, competent car can be bought for so little money. Rover 75s attract plenty of enthusiasts, but the 600 remains overlooked. Having owned both, I know which I prefer already.

The next report will contain fault-finding and even some eradication! After that, I’ll be putting 1200 miles on it in a week. Let’s hope it really is reliable…