Yes, I am a caravanist, and the space left by the departing Prelude has already vanished.

The day began with a very scenic drive through the snow-capped mountains of the aptly named Snowdonia National Park. It wasn’t the route my sat nav wanted to go, but tough. Snowdonia is prettier than Newtown. The route was a no-brainer in my book.

The destination was Queensferry in Flintshire, where my blind Ebay purchase awaited. It was a trade-in at Deeside Towing Centre, whose website is broken. That doesn’t matter. They were very helpful and had the caravan hitched up in no time. I handed over £220, and parked up a short distance away to fit a number plate to the caravan (the classy ‘plate gaffer taped in window’ look until I can sort out something a bit more dignified), and towing mirrors to the XM. Easy. 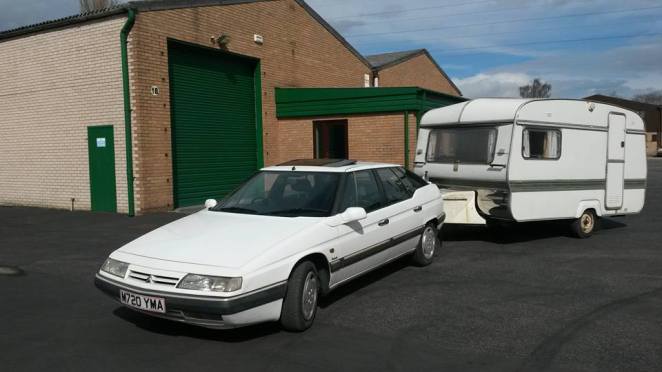 It begins! Ready to drag the new caravan home.

Then, we were away. I was towing a full-sized caravan for the first time, and getting used to a rather fixed view in the car’s internal mirror. I’m not sure if we were constantly climbing a hill, or driving into a headwind. Possibly both. 60mph (on the dual carriageway sections) was hard work. The temperature gauge was rising, though the electric fans stopped things getting steamy. I could smell years of muck and old oil starting to cook nicely on the engine’s surface though. The poor XM was working hard.

To give the poor, shocked XM a rest, I pulled over after a short while in a handy lay-by. I had been clever and brought a gas bottle, water, a kettle, teabags, a mug, a spoon and milk. Time for a brew! Or, it would have been if I had remembered matches. DOH! Fortunately, I had also brought some orange juice, so I had a continental lunch aboard my Abbey GT 212, and munched croissants as I took in the splendid velour and absorbed facts from the handy brochure. With double glazing, an oven and blown central heating (which may now be lacking parts), this is a fancy van. 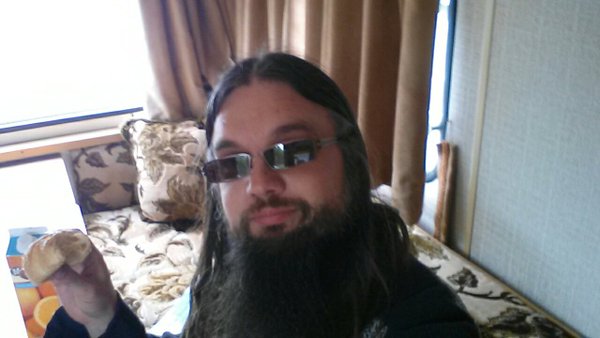 Croissants and velour for lunch. Stylish.

It didn’t feel fancy every time a truck went past. I was starting to feel nauseous. I refitted the steel wheel trims (because obviously that’s important) and got on my way again, ‘enjoying’ the fact that my XM now felt like the turbocharger and rear spheres had been removed. Caravans are good at absorbing power, and the weight of it was upsetting the Citroen’s usually cosseting ride.

Once up to 60/50 (dual/single carriageway), things weren’t so bad really. As I discovered when hauling the 2CV’s body up to Bradford, it’s actually quite relaxing to travel 10mph slower. Jeepers. How old have I become?! It’s true though, even if 50 is a bit annoying when towing. The XM struggles to pull it with the van attached and the slightest gradient becomes hard work. I was actually having to downchange. I rarely have to do this overwise! I may have pushed things to more like an indicated 55. This felt more comfortable and the sat nav said it was still 50-ish. This did also seem to mean that I didn’t have a queue of cars behind me. In fact, I kept catching people up! Who then angered me by slowing down on gradients that they had the power to climb easily! Ah, this was just like being in my 2CV. I still have angry memories of idiots getting in my way on the Hardknott Pass once, obliterating my hard-won momentum. Er, I digress…

A couple of hours of this saw me back home again, where the caravan seemed to win a new admirer in the form of Rachel. She fetched matches and we brewed up our first mugs of tea aboard our new camping machine. I think we’re going to enjoy it. I certainly deserved tea after reversing the caravan successfully down our narrow driveway! 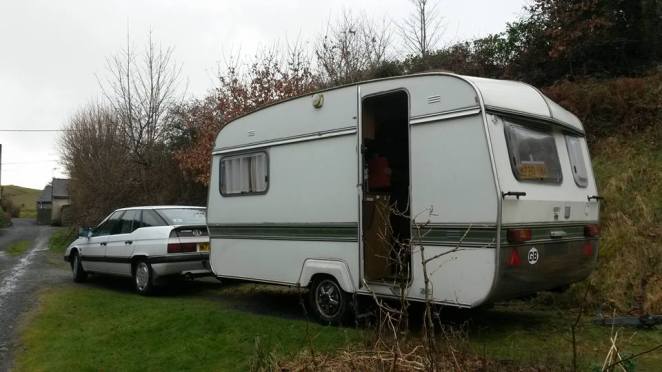 There really doesn’t seem an awful lot wrong with the caravan, though that could be famous last words. For less than a really good tent, we’ve got a proper roof over our heads, an oven, a nice, comfy bed that isn’t on the floor and Rostyle-type wheel trims. WINNING! The bathroom is a bit of a state, as the roof has clearly suffered from damp. In fact, the ceiling is entirely missing here. I don’t think we shall be using that room. I may try and fix it up though, as the rest of the caravan seems so good. A lot of trim looks remarkably fresh for 35 years old. It frankly astonishes me that retro caravans can be so cheap to buy. Even a shoddy motorhome would be the best part of £2000.

It will be interesting to see how we get on with it. The first camp we’re taking it to is in about a month’s time, so we can get it nicely cleaned up by then. Let’s hope we don’t get too used to it though. I don’t think the 2CV will tow it…